Pokhara (Hamro Khelkud) – Almost 28 Lakhs has been saved from the last edition of Aaha Rara Gold Cup. While declaring the budget for the upcoming 15th edition, Sahara Club informed about the total savings of 2 lakhs 78 thousand Rupees. Sahara Club has also been running the Sahara Academy in Pokhara. 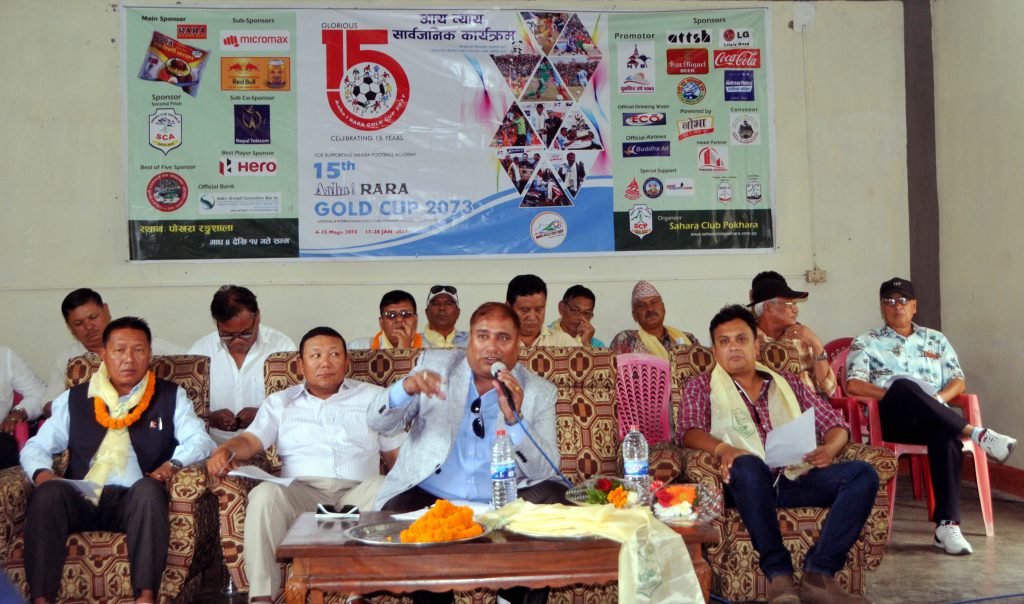 This profit was a slight decline compared with the previous editions. In the 14th edition, the club had saved 35 Lakhs rupees. According to Finance Coordinator Karki, 41 Lakhs 50 thousand 3 hundred and 70 Rupees were the income from the tickets. This included 39 Lakhs 82 thousand 3 hundred 70 Rupees from the Gate ticket and 1 Lakh 68 thousand from the seasonal ticket.

Including a few teams from Nepal, a single team each from USA, Bangladesh and India had participated in the tournament. Laxmi Hyundai Manang Marsyangdi had won the Aaha Rara Gold Cup trophy. According to Club President Bir Bhadra Acharya, the savings from the tournament will be spent on feeding and nutrition of the children at Sahara Academy.

According to secretary Keshav Raj Baral, there are 28 children from the poor and the disadvantaged class of 16 districts. The club said that annually about 22 Lakhs Rupees was required to run the Academy.

According to Acharya, the trust which has been established for the sustainable management of the Academy has a collection of Rs. 1 crore 25 Lakhs. He said the club aims to collect 2 crores in the trust. Aaha Rara Gold Cup’s main sponsor Himshri Funds’ President Surya Bahadur KC said that due to the good work of the Sahara Club, they are continuously supporting them.