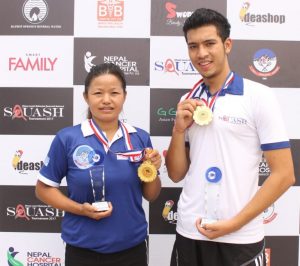 The winners were awarded amid a program by the mayor of Lalitpur municipality Chiri Babu Maharjan. The Nepal Squash Rackets Association had organised the tournament in memory of the mother of Association’s President Kishor Maharjan, Dhana Laxmi Maharjan. The six-day long tournament saw 85 players taking part in 7 different categories. The tournament had a cash prize of Eighty one thousand Rupees. All the categories included cash prizes except the Veteran and Plate categories.