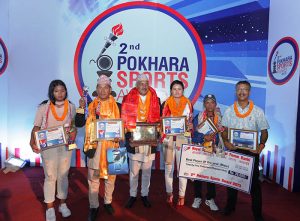 The second edition of the award, organised by Nepal Sports Journalist Forum in coordination with the Pokhara branch, saw Aruna leaving behind Sushmi Shrestha (Karate) and Tika Maya Gurung (Weightlifting) to win the award. Aruna was also nominated for the same award last year. She had played a vital role when Nepal stood second in the Central Zone Volleyball. Meanwhile, she was also announced as the best server in the RR-NVA League Volleyball and had won the bronze for the Western Region in 7th National Games. She had also achieved the second position in Srijana Aamantran Volleyball and the third position in KNP Women’s Volleyball.

Kumar Adhikari was announced the best player in the men’s category – leaving behind Cricket’s Karan KC and Handball’s Bishal Basnet. Kumar has been the national champion for five years. He had won Gold medals in the Open doubles and Mixed doubles for Eastern Region in the 7th National Games. However, he was limited to a Bronze in the Men’s Singles. Mamata Dagaura (Volleyball and Athletics) was announced as the emerging player. Darshana Budha Magar and Sagar Nepali from Athletics were also nominated in the category.

Mamata has performed well in Volleyball, Athletics and Football. Her versatile performance had helped the Western region to win Bronze in the 7th National Games. She had also helped her region to win golds in Volleyball and Athletics. Likewise, Taekwondo’s Sun Bahadur Lama was chosen as the best coach of the year. Lama, who has coached since 1995, has trained several players to win international and national medals.