“The main problem with the Nepalese team was defense when we went two goals down against India”, Koji said in pre-match conference on Monday. “We prepared for one week which was not enough to rectify the error in whole, however we are developing gradually, every day.” , Koji added.

Meanwhile Koji believes less spectators will cause no harm to the team when they face Yemen at APF Stadium at Halchowk.

“We know the supporters will be watching us through their television sets. So we wont face lack of support as we take on Yemen with less spectators”, Koji said when asked if lesser number of home crowd would effect the match.

The 18000 capacity Dasarath Stadium was hit with the devastating earthquake two years back and Nepal will miss out the home crowd advantage as the Halchowk ground can facilitate no more than 700 spectators.

Coach Koji also said he will be missing Rabin Shrestha as a full back but believes injury is part of the game and Nepal needs to cope up with what they have. “Nepal has problem on full back as compared to midfield, however injuries are part of the game and we need to cope up with what we have.” , he said when asked if Rabin and Bikram would be missed.

Koji believs Yemen will be stronger for Nepal, however the home side will give everything they have to challenge the visitors. Nepal faced Yemen in previous two times facing loss on both occasions. 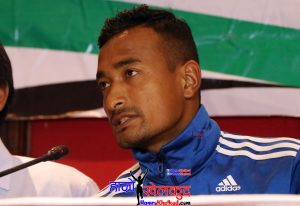 “We have been poor on marking in different occasions which has caused big problems sometimes”, Biraj admitted. “We will try to improve and not let Yemen score this time” , he added.

Biraj also said that loosing points on home soil would cause Nepal more pressure on away matches, so they will give everything it takes to stop Yemen from scoring.

“The war influenced Yemen had no proper environment for training, however we have been able to train abroad. ” , coach Mebratu said.

“We trained in Cairo for about month and a half and played with different first division teams. We dont have league in Yemen because of war and conflict so most players are far away from football” , Mebratu said.

“However we would like to pass positive message with a victory against Nepal. However team Nepal is improving everyday and we have huge respect for the country” , Mebratu, who had two earlier encounters with the hosts commented about Nepal.

Abraham was the head coach of the Yemen Olympic team when Nepal faced Yemen in AFC U-22 championship qualification match, played at Dasarath Stadium. Yemen won the match 1-0.