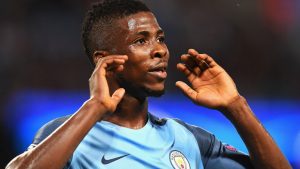 The club has signed a 5-year deal with the youngster. Having debuted in 2015 for Manchester City, Iheanacho has played 64 games scoring 21 goals. He had signed a new deal in August with the Blues; however, with the arrival of Gabriel Jesus, his playing time seemed far from regular. Leicester City’s intention to play him regularly as their main striker made the deal easy for both clubs.

Leicester City boss Craige Shakespeare said the signing of Iheanacho has added energy to their side. “It’s a great signing for us. Kelechi is an enormously talented player that has shown a huge amount of promise at every level in which he’s played. We’ve tracked his progress for some time. He’s ready for the next stage of his development and I’m delighted that will be with Leicester City.”