Kathmandu (Hamro Khelkud) – Nepal has confirmed their participation in the ‘Street Child World Cup – 2018: Future depends on you’ to be held in Russia next year. The tournament, which has been organised for the street and the helpless children, will be held a month earlier than the FIFA World Cup from 18th to the 27th of May. 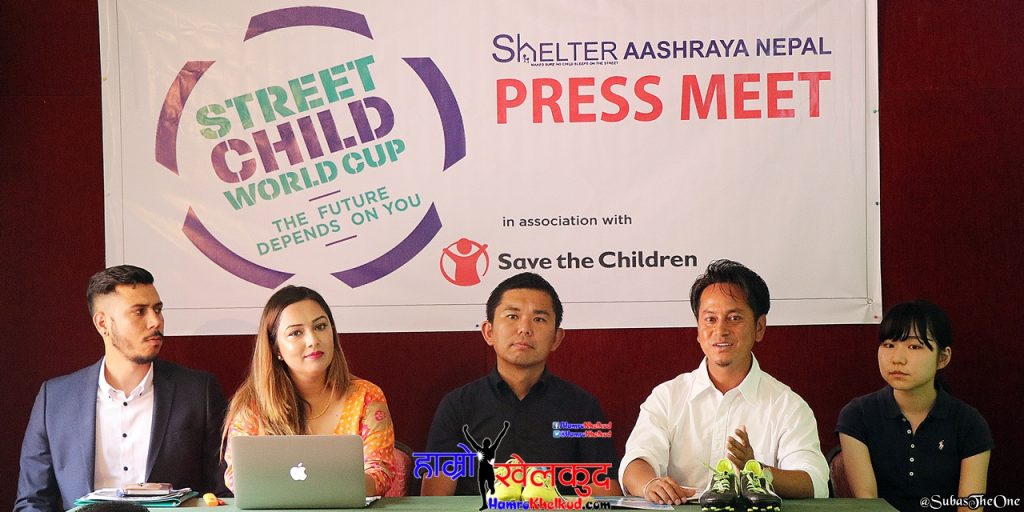 The Street Child World Cup is organised by Child United. Shelter Ashraya Nepal, who have worked for the orphan, helpless and street children in Nepal for last five years, confirmed Nepal’s participation in the tournament amid a Press Conference on Monday. The tournament will consist of 12 teams each in boys and girls categories from 22 nations. Nepal will take part only in the boys’ category.

According to President of Shelter Ashraya Nepal Khusbu Oli, a national tournament is in preparation for children from Shelter Nepal and other similar organisations. A total of 22 players will be selected for final training and then the number will be narrowed down to 9. The games will be played in a 7 a-side format.

Meanwhile, former National Player Basanta Gauchan handed over sports materials through Funroots Football Academy in Japan after getting the news of Nepal’s participation in the World Cup. The support materials were handed by the chief of Funroots Football Academy Jun Hirano on Monday to Shelter Ashraya Nepal. Funroots provided 30 sets of Football kits and 10 Football. Gauchan is also the coach of the Academy.

Speaking at the program, Basanta Gauchan said that he aims to open an Academy in Pokhara in the near future. “Whatever I have done in Japan, it is all for Nepali football.” “Nepali players are capable of playing in Japan’s J-league. I am also working to take the national players to the J-league,” Gauchan added.