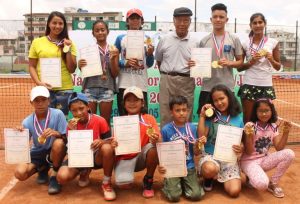 In the boys final between Samrakshak and Pranav Khanal, Pranav got injured when the match was tied on a set each. Pranav won the first set 6-1 but he lost the second set 6-3 before withdrawing the match through retired hurt. Earlier, Samrakshak had also bagged the U-18 Singles title. Likewise, Prerana won Saloni Tamang 6-1, 6-3 to claim her second gold in the tournament. Prerana had defeated Saloni in the U-14 Girls Single final as well.