Suryabinayak (Hamro Khelkud) – With the intention of conducting training and running a football academy, A-Division club Sankata has received land on lease in Ward no. 10 of Suryabinayak, Bhaktapur. 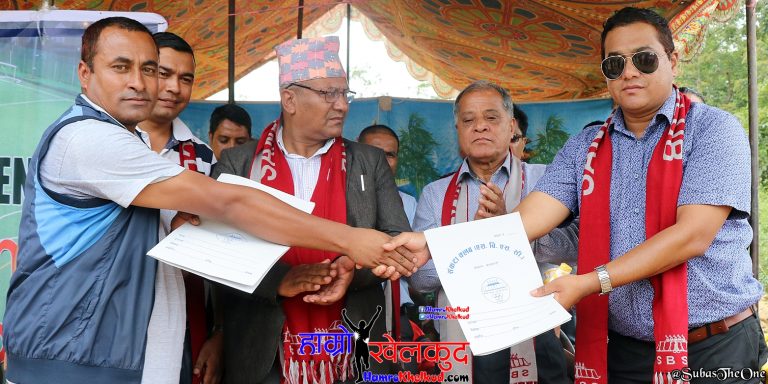 Suryabinayak Municipality Ward No. 10 today agreed to provide the club with 31 Ropani of land in Salpaphant for 15 years.

According to Sankata, they will build a football ground in the land. The agreement mentions that Sankata has to pay Twenty-seven thousand rupees to the land owners per Ropani each year. The property is currently owned by 9 people. Laba Thapa, representing the land owners and Sankata President Indra Man Tuladhar signed the agreement.

The club has taken the initiative to build their own ground after Asian Football Confederation (AFC) had made it compulsory for all Nepali clubs to undergo Club Licensing within few years.

Basudev Thapa, mayor of Suryabinayak municipality, described Sankata’s effort as a good initiation. “As we had announced earlier, this will be an important contribution to sports in making us a model Municipality.” “This step will be a great help to us,” Mayor Thapa added. He also thanked Sankata for taking the land on lease and said that they could further extend the 15-year period in future. He even indicated that the agreement will create employment opportunities for the locals.

Speaking at the program, All Nepal Football Association (ANFA) President Narendra Shrestha said that this agreement enables other clubs to use their ground facility too. President Shrestha said, “Every club will need their own ground for the Club licensing. So, this step of Sankata is praiseworthy. I wish the club for further progress in future.”

Suryabinayak Ward no. 10 President Shivaram Raut believes the cooperation with Sankata will be important for local development. He promised to give full support to the club as he is hopeful that several local people will get employment during the building of the infrastructures. Tuladhar, who is also the CEO of ANFA, believes the step will prove vital in the development of football. He said,” We will build a football ground then gradually other structures like the parapet. Now Sankata will do their league and other preparations on this very ground.”